John was the youngest son of William Dickey Henderson and Sophia Porter of Belfast Ireland. At the age of 21 years he emigrated to Australia aboard the Clipper ship “Orient” arriving in Adelaide on 13th July 1863. He came ashore immediately and reported to the Bank of South Australia. He comments “I like the people, so far as I have seen them, very well.”

At the age of 24 he married Margaret Temple Poole age 23 on 17 August 1865 in St Peters Collegiate Chapel in Adelaide. He was at the time living in Victor Harbour working as a banker and she in Payneham (her father was Robert Temple Poole).

He started work immediately in Adelaide as a banker, he became the first Bank Manager at Victor Harbour of the Bank of SA (1865-1870), 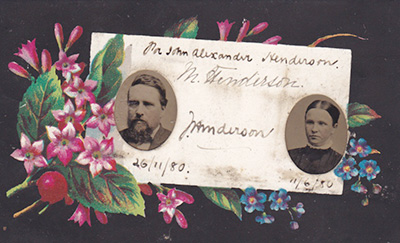 living in the Bank House, and

Bank House, RobeManager of the Bank of SA, Port Adelaide from 1875-1880. While in Victor Harbour he led a committee that arranged for a wooden building to be relocated and opened as The Institute and later in 1874 he arranged a loan to build a new as Institute and Library building. 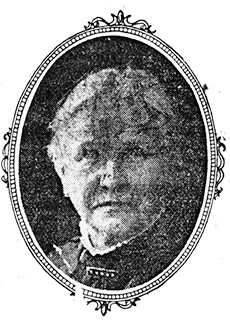 He was then Secretary of the Colonial Mutual Life Office in Adelaide, living in Poltonga, Harrow Road. He was Treasurer of the Institute and a member of the Chess club and the Pickwick Club. He was also an active Magistrate. 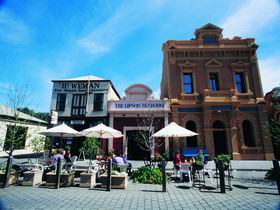 In a magazine article entitled “Our Wonderful Pioneer Women … No.8″ it describes how “Margaret Poole came to Australia at the age of eight in the “Gypsy Queen” and was the first boarder at Miss Thornber’s school in Unley Park. Mrs Henderson lived in Victor Harbour when it was a little country town and not the gay seaside resort of today. She became well known among the aboriginies there and many years afterwards she was hailed in King William street by name by a crowd of blacks who had come to Adelaide to receive a gift of blankets on the Queen’s birthday. She remembers the days when water was brought from the Torrens in large wooden vats and sold at house doors.”

When they moved to Adelaide they lived in a house called Poltoonga, Harrow Road, St Peters, E. Adelaide. He died there in September 1903 of a heart attack. His death certificate notes that: 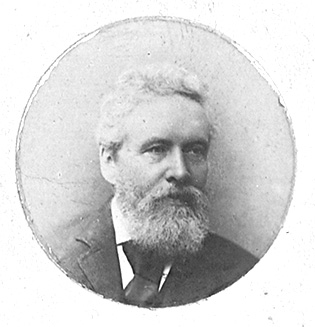 “Mr. John Henderson, the resident secretary of the Colonial Mutual Life Assurance Society, died in a remarkably sudden way in the city on Monday morning. He went to his office in King William-street as usual on Monday, and after attending to some business walked into the street. When crossing over the intersection of King William and Pirie streets he was noticed to trip over the tramline and fall. Two gentlemen, placed him in a cab and had him driven, to Rundle-street, where Constable Noble took charge of Mr. Henderson, and conveyed him to the Adelaide Hospital. Upon arrival at that institution Mr. Henderson died before he could be removed from the cab. Death is attributed to either a fit or heart disease, which, it is thought, caused him to trip over the tramline. His forehead and arm were bruised by the fall. Mr. Henderson was 62 years of age, and was born at Belfast, Ireland. He arrived in South Australia about 40 years ago, being sent here from London by the directors of the old Bank of South. Australia. He had been manager of the Port Adelaide, Robe, Victor Harbour, and other branches of the bank. The deceased took over the resident secretaryship of the Colonial Mutual Life Assurance Society in 1894. He was well-known among business men in Adelaide, and his private residence was at Harrow-road, College Park. For years Mr. Henderson was organist of the Church of England at Burnside. He has left a widow, four sons, and five daughters. 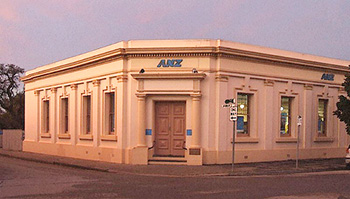 In 1865 Victor Harbour’s first bank was opened. The original facade has changed little

THE FRIENDS of the late Mr. JOHN HENDERSON are respectfully informed that his remains will be removed from his late residence, “Poltoonga,” Harrow-road, East Adelaide, on TUESDAY, at 4.15 p.m., for interment in the North-road Cemetery.”

DAUGHTERS OF JOHN and MARGARET HENDERSON 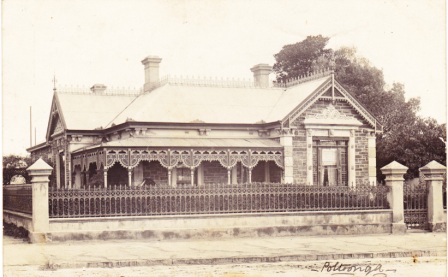 His wife Margaret and the three unmarried daughters of John Henderson, Mary Elizabeth, Maggie Beviss and Dorothy Anna, ran a very ‘nice’ girls school from Patoonga, Harrow Road, Adelaide. They were a pretty stern collection of women. Maggie was the cook. Jane married Horace Blundell on 7th June 1906. They had no children, and the fifth daughter, Ellen married Robert Wooley Scott of Western Australia and they had four sons and one daughter. 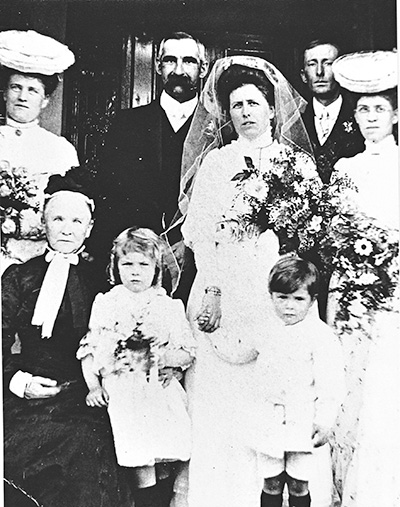 In the photo above:

He was born in the Bank House in Robe. Like the other two sons he was sent to St Peters College in Adelaide but money started to run short and he was then sent to Norwood School in Adelaide. Because of financial difficulties he left at 14 or 15 and started working as an office boy.

From his home in Robe “Jack” courted Audrey Tapfield from Taratap, riding over at the weekends on his horse to visit her.

They were married in December 1900 and he subsequently became Manager of Metropolitan Life Assurance Co. Ltd. in Sydney. He lived in Mosman and had five children – Eric who died as a child, Marjorie 1901, Frederick John 1902, Walter Douglas 1903 and Nancy 1904. 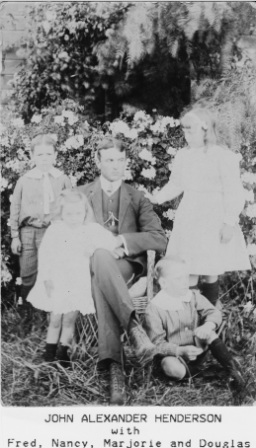 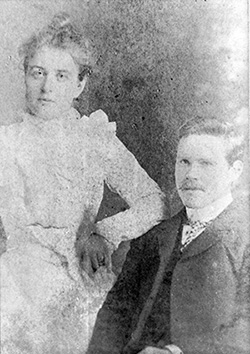 Audrey Tapfield’s grandfather Samuel was a music teacher in Cambridge. He raised six children but found the weather unpleasant and the teaching of music was hardly lucrative so the family of eight sailed from London to Tasmania on the “Derwentwater” on October 13, 1852. Frederick, one of his sons, followed in his grandfather’s footsteps and took up farming, managing a large property called Keilara and a year later buying 15,000 acres at Taratap. He later also had extended leases on a further 62,000 acres. Frederick’s daughter Audrey attended Saints Girls school in Adelaide and was subsequently a student teacher in Adelaide.

On his death John Alexander had a considerable amount of money invested in shares. This money was left in trust, the income to go to his daughter Nancy who had cared for him and acted as his housekeeper after the death of his wife. 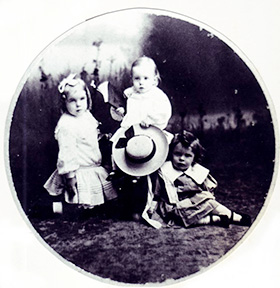 Nancy remained single and lived in a unit in Mosman. She and Marjorie visited each other frequently and enjoyed horseracing and whist. She suffered for some time with heart conditions and died in the 1980s. 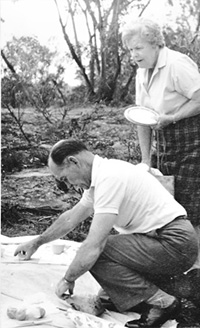 Marjorie married her friend Dick Groves who was 20 years her junior. This caused some disapproval in the family but in the end he died before her and Marjorie lived into her 90s suffering for the last 15 years of her life from Alzheimer’s disease.

All John Henderson’s money left in trust to Nancy then went to Marjorie. During her illness she was visited by Dick’s sister who inherited all the “Henderson” monies. So ends that saga.

“Mr William Douglas Henderson of Salisbury Terrace, Collingwood, who died at his home on Sunday was closely associated with St Peters College for more than 65 years. He was a student member of the school council, President of the Old Scholars’ Association and always an enthusiastic spectator at most of the school’s sporting fixtures.

Mr Henderson was born at Victor Harbour, the eldest son of John Henderson and Margaret (Poole). After spending some years in Western Australia he joined the firm of Annells & Co. Accountants of Adelaide with whom he was associated for more than 25 years.

Mr Henderson was a prominent member of St Andrews Church, Walkerville and was on the committee of the Walkerville Boys home. In his youth he was one of the outstanding Lacrosse players of South Adelaide.

He had no children.

His house in Adelaide was called Tamna Wood after the village in Ireland, the home of his Great Grandfather.”

The second son of John Henderson and Margaret (Poole). Married to Kathleen (1875-1903), they had two children – Charles Porter John and Margaret Logie. Charles Porter or “Jack” married Joan, daughter of Madelaine de Chastelaine and Percival Carne, Indian army types. He had just one daughter – Penny. His second marriage was to Lindsay Thompson. They lived in Western Australia.

Penny married Tony Latham. They live in Western Australia and have two children, Carolyne and Andrew.