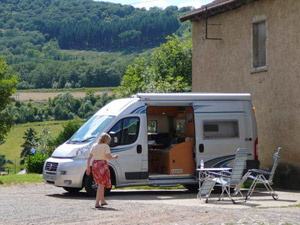 The dormant campervan project had been resurrected after nearly two decades. Research on an activity that would be new to us indicated that our needs would best be met by buying an affordable van conversion (cheaper than hiring one for any period over three months), of a compact size. We did not want a cumbersome coachbuilt “motorhome”, we thought, even with its bigger living space. We settled on an Fiat-based Trigano Tribute, a 2007 model put together in Italy to UK specifications and bought in England. If the trip and vehicle turned out to be below expectations, we could always sell it later. However, we have been thrilled with our choice. It drives pretty much like a big four-wheel drive. It is fully self-contained, with cooking, fridge, showering and toilet facilities. Being yachties, we find we have plenty of space for lounging and eating, and more practical living room than many motorhomes we have seen.

We make up the beds for sleeping, but that only takes ten minutes and is (we feel) an excellent trade in return for a shorter and more manoeuvrable vehicle than one with a fixed bed that is unused all day.

After a few days in Southampton getting some details sorted out, we took the ferry from Dover to Calais and pressed on via the atmospheric battlefields of the Somme to Paris, where Michael had a series of meetings with FIA committees. We camped in the Bois de Boulogne, at the same (but now unrecognisable) site where we had pitched a tent during our first trip to France in 1960. This is now a busy commercial site, but reasonably convenient for the city and for the spectacular modern business suburb of La Defense. 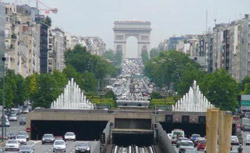 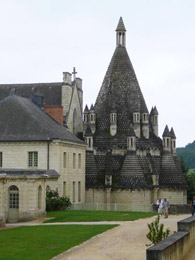 FIA visits over, we headed south-west for the lower Loire valley, where the great river widens and slows through peaceful countryside. A memorable visit there was to the Abbaye Royale de Fontevraud. This is a truly amazing medieval monastery, with a splendid chapel, a high vaulted nave towering over effigies of Henry II, his wife the controversial and fascinating Eleanor of Aquitaine (who spent much time here) and their son Richard I (the Lionheart). We enjoyed the peaceful cloisters, large refectory, and the impressive Tour Evraud, an octagonal kitchen building in secular Romanesque style with its several pepperpot chimneys over each of the cooking bays.

Reaching the west coast, we cut south through some touristy towns but also the beautiful little port of La Rochelle. Here, in the typically friendly approach of the French to “campingcars”, as they call them, we were told we could stay overnight in the park-and-ride car park for 5 euros. However, we moved on, this time heading east across the country towards Lyon, where Michael was registered for a vehicle safety conference. On the way we passed through the lovely region of the Auvergne, beautifully quiet, rolling countryside punctuated by pyramidal volcanic hills. 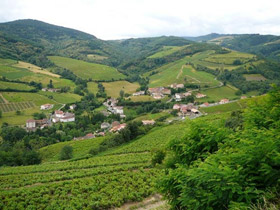 In Lyon we caught up with a few old friends and some gee-whiz advances in vehicle safety, but the city was a nightmare to navigate around. We were camped at a big site a few kilometres to the north, and drove in and out each day. We’d still be there trying to get out, were it not for our navigation system. We have a small GPS receiver linked to a mapping program in the laptop which covers the whole of Europe but can be zoomed down to the level of the smallest streets, many of which we found ourselves stuck in before getting the electronics to help us get out. We love real maps and use them all the time, but for aid when lost – truly or just potentially – nothing beats a GPS.

From Lyon we did a big loop up through and around Beaujolais and Burgundy, with short daily legs between chateaux, monasteries and – of course – vineyards. There, we tried for the first time the “Passion France” system. The deal is this. You pay a small fee for a book that gives you a year-long pass to thousands of vineyards and farms, and it tells you (roughly, we found!) where they are. If you are in a completely self-sufficient campingcar, then you can stay overnight for free. There are no obligations, but simple courtesy demands that you sample the wares at a tasting, and probably load up a few bottles. Good fun, but the visit tends to be very far from free! 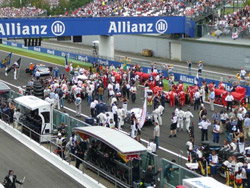 The next major stop was at Magny-Cours, where we had VIP passes for the French Grand Prix. We watched the race itself from a box right over the pits, amply supplied with French wine and food, and had free access to the paddock.

As something of a contrast to this luxury, we joined the hundreds (thousands?) of campers at the enormous site at the circuit. From where we were, we could walk a few metres up on to the public banking, from where there was a terrific view of most of the track. But come the night – wow, the never-ending sounds of thump- thump music and revelry kept us well awake! It was clear that the Grand Prix was one thing – having a very good time was the other, and noise was part of the fun.

We were rather relieved to survive all that, and were happy to head south for warmer weather than we had being having. 2007 was a very cold and wet summer for northern Europe. We headed down through the deep and spectacular Gorges du Tarn and other valleys and hills of the southern Massif Central, with tortuous drives via several gorgeous little walled cities such as La Couvertoirade along the “Templars’ Way”. 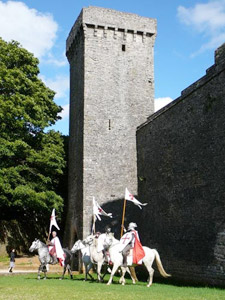 There was a dramatic change in the scenery as through much flatter land we reached the Mediterranean coast at Narbonne, and then headed west generally along the route of the Canal du Midi. We took a day trip on the canal, and beautiful as it was, we agreed that our decision to take to the roads rather than the waterways had been a good one. Early the next day we visited the extraordinarily restored fortified and famous citadel of Carcassone, with plenty of signs of its repeated rebuilding over the years even before the le-Duc restoration of the 19th century. Incredibly picturesque, and not surprisingly a very popular tourist destination. We got in early enough to enjoy a guided tour of part of the ramparts, and walked by ourselves around the inner castle without too many others.

We had visited Pau, in the foothills of the Pyrenees, in 1961 (and saw Jimmy Clark win his first F1 race), and had crossed from France to Spain through the mountains during a tour in 1972. But we had long wanted to explore the whole mountain range, and this time we were able to do so at leisurely speed. We did a couple of laps around the Pau street race circuit, of course, as an interlude during a memorable series of great drives through awe-inspiring scenery of manageable, rather than overwhelming, scale. 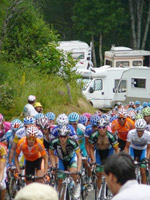 We mostly “free- camped” in the mountains, often joining one or two other campingcars in unused car parks in ski country, way above the clouds in the valleys below. Shy marmots, looking a bit like beavers or wombats, lay in the sun among the rocky slopes below, and griffon vultures, native to the Pyrenees, soared lazily overhead. Goats, left free to roam in the mountains during the summer, dropped by for a feed.

While in the Pyrenees we were caught up by the Tour de France, and we stopped by the roadside on a steep hill up one of the cols, one of the toughest stages in an unimaginably tough event. There were people, cars and campers all along the route, and we had been lucky to get a good spot the day before the whole circus came through: sponsor floats with riders throwing samples of their goods to the watching throngs, and then finally the packs of racers making astonishing speed up the climb. At the time the Australian Cadel Evans was lying second (where he finally finished), which awakened our interest in the event right through to the end. 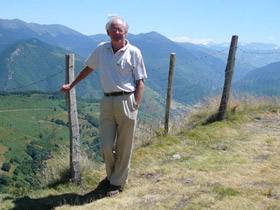 We were very sorry to leave the Pyrenees, as we dropped down through Basque country to the posh tourist destinations of the southern Biscay coast. Via Biarritz we drove generally north up the coast, through the marvellous maritime museum compound at Rochefort, spending nights camped by the sides of tiny tidal fishing harbours or just off some wild beaches as Biscay gales shook the van. Brittany, along with the Pyrenees, was one of the major targets of the trip. Our route was predominantly coastal, winding in and out of bays and inlets around the Morbihan, Quiberon and around to the northern shores. At Concarneau, where the beautiful old walled town is on an island in the harbour and incorporates a fascinating fishing museum, a car park dedicated to campingcars offered a free bus shuttle into the heart of the town. We walked out to the ends of all the wild westernmost headlands of Brittany, cliffs pounded by the relentless surge generated by the continuing very windy weather. On such a windy day we rode out in a ferry to the Ile d’Oessant (Ushant). On the way we crossed our track of July 1986 in Cera, when my log recorded that the passage between Ushant and the mainland was “very rough”. More reminiscences flowed from our slow drives along the challenging north coast of Brittany, where we revisited several of the ports and inlets we cruised through all those years ago. Very little had changed, we agreed, as we pointed out the bays where had anchored and the marinas where we had tied up. 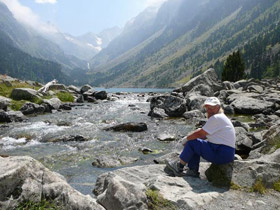 Finally in France, with a day to spare before we caught the ferry from Cherbourg to Poole, we did a quick tour along the beaches of the Normandy landings. Thus, without planning such a thing, we had started our time in France at the battlefields of WW1 and ended it on the D-Day beaches which were the violent beginning of the end of WW2. We crossed the Channel on a lovely day, with a gorgeous run through Poole Harbour. Back in England we enjoyed catching up with the family, including (sister) Kate and Derek, (nephew) Rob and Caroline, and (niece) Niki and Neil along with all the kids. We had a great few days with Norma’s cousins Chris and Colin, Ann (also Norma’s cousin) and Frank, and while staying with them enjoyed the extraordinary Goodwood Revival historic race meeting. 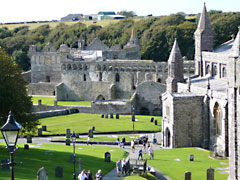 Lord March attempts to recreate the atmosphere of the 50s and 60s, and most people dress accordingly; however, while the drivers and mechanics at the Revival now all wear immaculate overalls, when we raced there in the 60s we and most others were the same scruffy mob at a motor race meeting as we are now!

With another week to spare we enjoyed a tour of South Wales in weather that was the best the UK had had all summer, and better than most of the time in France! And thence back to Dorset, where we left the van, our home for four hugely enjoyable months, safely locked away in the barn of a farmer who now finds storing motorhomes and caravans more lucrative and less stressful than farming cattle. We are booked to return in May 2008.