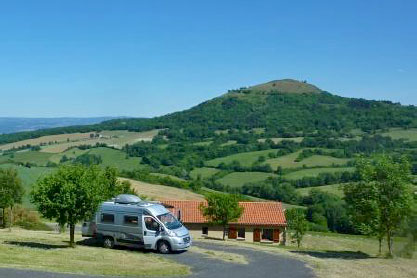 In May we both flew back to Europe for our fifth summer there in our compact motorhome. In general terms this year’s plan was to make a big loop, down through France and across to Spain and Portugal, and then back up again. And that’s pretty much what we ended up doing. We went quite quickly down through France, revisiting the glorious cathedral of Chartres and the lovely rolling countryside of the Puy-de-Dome region of the Auvergne. 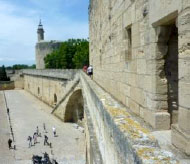 We were soon settled in a favourite motorhome “aire” (a French word for a parking area for what they call camping-cars) on the beach between the sea and the flamingo lagoons of the Camargue. The route then took us round the Golfe du Lion, taking in the marvellous old walled town of Aigues-Mortes. It is reminiscent of Dubrovnik, where we also walked the circuit of the walls a few years ago. 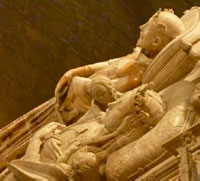 The border with Spain was seamless, like most of Europe these days. The weather was not brilliant, being very changeable, cool and windy, so we postponed our planned return to the Pyrenees and headed south in a search for the sun. Into Aragon, and an outstanding visit to the marvellous, still-working Royal Monastery of Santa Maria Poblet. Since its construction in the 12th Century it has been wonderfully restored, and in the crossing of the church there is an extraordinary collection of royal tombs in alabaster, with finely carved figures, animals and plants. With the weather heating up we wended our way west through the sierras, hills and countless medieval villages, castles and windmills of Castilla-La Mancha. 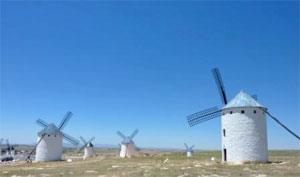 In Toledo we visited the immense cathedral, the spiritual heart of the Catholic church in Spain. We found the interior gloomy and overpowering, but with some gorgeous carvings in the choir and an unusual two-part organ. There’s lots more to see in Toledo, of course, but it was blistering hot by this time and we were glad each evening to get back to the unusually, for us, upmarket camp site with a large swimming pool that we had almost to ourselves. 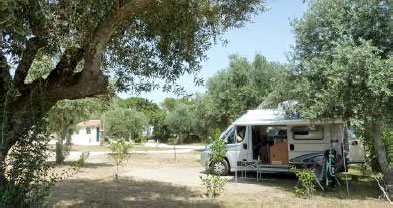 We continued west to Portugal via the desert landscape of the Extremadura and the well-restored Renaissance city of Caceres. Nearby was a highly unusual, immense manmade nesting place for storks, which had been forced from their nests in a ruined monastery that had been rebuilt as a hotel. The first stop in Portugal was at a lovely little camp site owned by a couple of Englishmen. It was quiet, deep in the countryside but with the picturesque hilltop village of Marvao close by, a great little pool and free wi-fi – what else could you want? We stayed there for about a week, lazing around, and walking in the cork forests where we watched the harvesting. This is done after 25 years of initial growth and then every 9 or 10 years for each tree. Cork is a major contributor to the economy there, and we didn’t see any screw-topped wine bottles!

Lisbon, being on the coast, was thankfully a bit cooler than inland. The Belem area, where we joined many other motorhomes in a large free parking lot on the waterfront, remains very beautiful, especially the spectacular monastery. But the rest of Lisbon is now looking very down at heel, which we found to be true for most of Portugal. The country was declared to be of junk bond status just as we arrived, and the precarious financial situation was very obvious, with vast expanses of unfinished developments along the entire coast. Spain was similar in that regard, but had superb roads, the best in Europe. “So they should be”, said a German friend. “We paid for them!”.

From Lisbon we meandered our way north, visiting some parts of the coast that we had visited scores of years before in Cera, and deviating inland and to the mountains to visit beautiful sights such as the monastery at the Palacio de Mafra. This has a marvellously restored infirmary, with the main ward being a long chapel and each bed along the sides being enclosed by a screen. 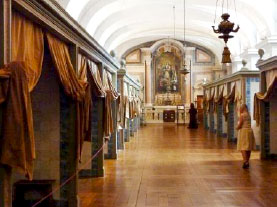 The monastery also has an enormous, long, light and airy library with about 40,000 books and a lot of bats, which we did not see. 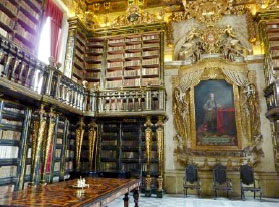 In the Biblioteca Joanina in Coimbra, the original capital of Portugal, there were even more books in its glorious library: about 300,000. Another interesting monastery is at Alcobaca, with one of the most extraordinary kitchens in the world. It has a fireplace big enough to spit roast a whole ox, with an awe-inspiring chimney covered with blue and white tiles, towering up to the sky through the roof and visible for miles.

We returned to Spain over the river Minho, and drove through lush Galician countryside to Santiago de Compostela and its ornate, spectacular cathedral. The city is the target for about 20,000 pilgrims” who walk there from all over Europe (or a lot closer to the minimum of 100 km) along the well-marked caminos. 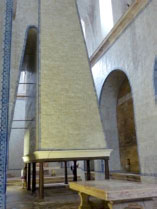 These routes are mostly cross-country but do follow the vehicle road every now and again. We passed hundreds of walkers on the roads of northern Spain and south-west France, many carrying the traditional shells, floppy hats and walking sticks, with an air ranging from tall, brisk and confident to depressed, limping and exhausted.

The cathedral, squares and roads in Santiago were seething with them, as the main festival of the year was only a few days away. There were lots of good mountain drives in northern Spain, but after enjoying them Michael had to leave Norma with the van in A Coruna for a few days to fly to London for FIA meetings. She had an exciting but not very enjoyable time at the camp site, having to move away from druggies in a tent that they had pitched right next to the van. One was carted off to hospital following an overdose while Michael was away.

We were not sad to leave Spain, with its absurd opening and eating hours and very late and noisy evenings, and were delighted to return to the French Pyrenees in the Basque country, one of our favourite regions in Europe. 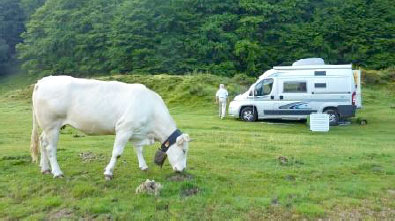 There is a lovely part called the Foret d’Iraty, which has a large grassy parking area where camping is welcome and where cattle and the semi-wild Basque ponies, “pottocks”, roam freely among the camping-cars and a few tents. It was great to be back in France, and we enjoyed some lovely countryside and villages as we wandered up through the Midi-Pyrenees towards Aquitaine. 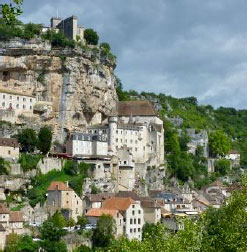 A memorable stop was at the tiny fortified village of Larressingle, much altered over the years but now essentially as it was in medieval times, a uniquely preserved little jewel. It is completely enclosed by walls, with houses nearly all the way round, sharing this protection during its interminable years of constant warfare. The most famous place around here is the sanctuary at Rocamadour, built into the face of a dramatic cliff. This has been an important centre of pilgrimage since 1166, and after a decline in the 17th and 18th century was restored in the 19th. It is still a holy shrine for Christians – as well, of course, being one of the most popular tourist destinations in the country.

The jumble of sumptuous chapels rests in this simply astounding position, half way up the face of the cliff. 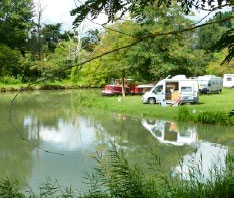 Going through to the Dordogne we stopped for a few days at a lovely spot right on the bank of the Canal Lateral a Garonne et Lot. Just here, a double lock drops down to the River Baise and thus into the Lot. There was therefore plenty of action all day, watching boats coming and going with varying degrees of expertise, and being shepherded through the locks by a cheerful young woman lock-keeper. A more sombre visit was to the extraordinary remembrance village of Oradour-sur-Glanes. The memorial centre presented a good display, visual and video, of the events leading up to the massacre by Nazis that took place there shortly after D-day. Women and children were herded into the church, shot and burnt, and men were shot wherever they gathered, mostly in garages.

As we have toured Europe we have seen countless photographs of destroyed villages and towns that have later been rebuilt. It was a unique experience, therefore, to walk through a village left just as it was after the terrible events of 1944. Actually, that’s not quite true – the 642 incinerated corpses have all been borne away, and 67 years of rain have washed away most of the carbon from those walls which still stand.

It was mid-August by this time, and the most popular attractions were getting very busy. Not too bad was the number of visitors to the superb Benedictine abbey of St-Savin, with its interior decorated by the most magnificent series of 12th century frescoes in Europe, picturing stories from the bible. But up in the Loire valley, where we have toured before, the crowds made it impossible to do much more than enjoy the exteriors of the most popular chateaux. In Normandy we spent some time in Caen, destroyed during the war but well rebuilt, and now the site of an immense new museum of the history of 20th century warfare in Europe.

There are several very good selections of video on screens throughout the museum, mostly taken from contemporary British, French and German news stories. These present some nice contrasts and contradictions: for example, in a selection of Pathe stories about bombing, the London Blitz is described as an attack on innocent civilians by terror flights, closely followed by another story of the bombing of Dresden described rather triumphantly as an “annihilation”. In an interesting section examining the concept of “total war”, there is good video of Goebbels screaming that in total war, there are no victors and losers; only the survivors and the annihilated. In the Cold War section there is an interesting selection of propaganda videos made by both the USSR and the USA, with the usual gross exaggerations. All absorbing stuff for a war history buff like Michael, as was a visit to the “Pegasus bridge”. This is where, with astonishing accuracy, gliders and parachutists were landed in the night, right by the bridge that had to be held to open the land route east from the Normandy landings. A replica Horsa glider stands nearby. 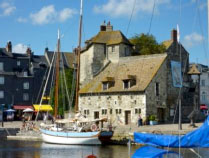 After taking the coast road up through Normandy, via the lovely little port of Honfleur, we crossed back to England from Calais at the beginning of September, with time to do our annual catch-up with as many relatives and friends as was possible. We also made a fascinating farm stop in the New Forest, where among other animals the owner breeds donkeys, including a unique giant variety. Since returning home Michael has made two more trips for the FIA Institute, to London for meetings and to Florida to speak at a safety conference.

The year of 2011 ends with our 50th “golden” wedding anniversary on 23 December. We regard this as something of an achievement, and are having an informal celebration, to which Anita and Ron will be coming over from NZ for a couple of weeks. It’s a time for reflection, as our joint life has passed by in distinct phases: first, work in London, and Anita’s birth; then five years in the RAF, mostly in Cyprus; the move to Sydney and 13 years of Michael’s busy work as a road safety researcher and administrator, and Norma as a sailmaker, the two of us meanwhile building up a yacht from a bare hull; eight years of voyaging through 45 nations of the world; a return to Sydney, and 18 years of consultancy work and Norma’s work with native animals and manual writing; and finally into retirement, sort of, with voluntary work by Michael with the FIA Institute and Norma with her animals and manuals, and including a yearly four-month tour in Europe with our motorhome.