I released two juvenile long-nosed bandicoots in my garden and put a group of four young ones into the “rabbit hutch”. A few days later one of the released juveniles came indoors and I found it in the bedroom. So, I caught it. Having shut the babies in the covered section of the hutch I put this one in the outside section. I gave it a good feed, not knowing how long it had been indoors, and it made itself a nest and went to sleep.

Come dark I propped up the cage to allow the juvenile bandicoot to self-release. 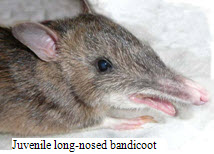 It did so and I put the cage back in place and opened the door for the babies to come back out. What I didn’t realise till too late, however, was that a gum nut was wedged under the cage leaving a small space. When I later checked there were only two babies left inside. Panic, two had escaped and it was pouring with rain.

I searched the garden and listened for any disturbance but saw nothing. Then as I watched from indoors one baby came back and tried to re-enter the cage. When I rushed out it panicked and disappeared.

So, I got out my bandicoot trap and put some meat inside. Very soon I had caught one of the escapees. Feeling not quite so devastated I left the trap out and in the morning the remaining baby was inside.

What a relief. I was beginning to feel such a failure. Now all I have to do is keep the door closed to stop the juvenile one from coming inside.

The next evening I saw her walking in front of the door looking for a gap. So, now I put a little food next to the hutch for the released ones and a pile of food inside for the others.