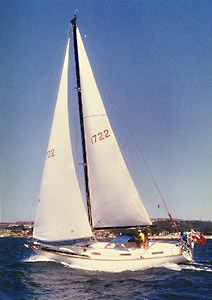 After nearly a decade of planning and preparation, we finally cut our ties in Sydney and sailed for New Zealand in late 1981, starting a voyage in our yacht “Cera” which was to end eight years later, to the very month.

In 1974, after years considering the possibility of ocean voyaging, we committed to contracting the building of a strong fibreglass hull and deck, and then fitting it out ourselves. This would include all the interior woodwork and fittings, engine installation, assembling all spars from contracted parts, and making all nine sails. In 1977 we made a 2000+ nautical mile return trip to New Caledonia by way of a maiden voyage.This made practical the dream that we could and would make a complete getaway, living aboard under sail for an extended but indeterminate period of time.